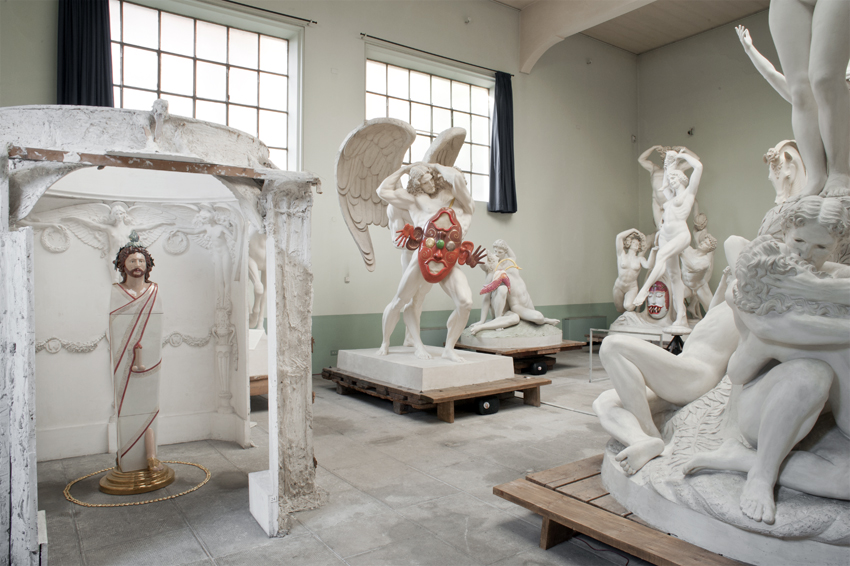 The Norwegian painter-sculptor Heindrik Christian Andersen, who became an American citizen but resided in Rome since 1897, designed and built his own house-studio in the form of a “house with an adjoining studio” between 1922 and 1925 near the Porta del Popolo, in the area which was then undergoing expansion between the initial stretch of Via Flaminia and the embankment of the Tiber.

The building, which features Neo-Renaissance forms and external faces rich in symbolic decorative elements of the sentimental universe of the artist (such as the big fascia painted with allegorical subjects on the top floor executed in 1935) or the series of portrait-heads of the artist’s relatives that overlook Via Mancini and Via Pisanelli, certainly represents an interesting example of architecture and decoration in the artistic Roman panorama of the time; nevertheless, following restoration work promoted by the Special Office for Contemporary Art (SACS) and its opening to the public in 1999, it especially emerges as an exceptional testimonial of an artist’s atelier-home since it has remained substantially intact.

Since it is close to Valle Giulia, it has been included within the boundary of the Parco dei Musei as asatellite-museum (together with the Museo Praz, the Museo Boncompagni-Ludovisi and the Museum Manz of Ardea) of the National Gallery of Modern Art.

Within this fascinating original setting of the completely restored environment it is possible to visit the artist’s Studio, a veritable jewel, which saw the realisation of Andersen’s impressive sculptures dedicated to the phases of love, maternity, fine physique, of intellect against brute force, all these works were ideally intended for that ”World City” outlined by the artist in the great design exhibited along the walls of the so-called “Gallery“.

This exhibition room is also located on the ground floor where Andersen used to show visitors his finished products.

The utopian idea of a great “World City“, an international centre for a creative laboratory extending from the artsto the sciences and to philosophical and religious thought, which was richly illustrated in the book “Creation of a World Centre of Communication” produced with French architect Ernest Hebrardin 1913, illustrated an entire artistic research on Andersen which was translated into over 200 sculptures (plaster and bronze, of which aboutforty are from the Studio), in over 200 paintings and in more than 300 graphical works currently distributed between the ground floor­location of the two ateliers – and the first floor, once the home of the artist and now used to display the permanent collections of smaller dimensions and to organise temporary exhibitions mostly focusing on the relationship between Italy and the European and American artists of the XIX and XX centuries.

The opening to the public of his house-atelier was what Andersen himself intended and left the building to the Italian State when he died in 1940.

Visiting Hours Every day from 9.00 am to no pm