Piazza di Spagna (Spanish Steps) is the only place where three distinct elements of urban decor, a fountain, a flight of steps and a church, have become a monument in its own right, as well as a scenic wonder.

The actual form of the entire area starts to define itself at the beginning of the 16th century when it is decided to change, on the project of Carlo Maderno, the construction of the Franciscan church of the Trinity of the Mounts, then consecrated by Sisto V in 1587 after Christ.
Since there were not the necessary funds to realise the stairs, guaranteed by a testament legacy dating from 1660 of the French diplomat Stefano Gueffier, and since the diatribes on the ownership of the land were not resolved, the connection between the top of the hill and Piazza di Spagna was made of two pathways going down through the trees. 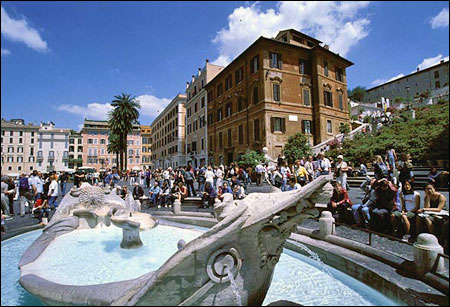 The stairs of the Trinity of the Mounts is realised only between 1723 and 1726 after Christ, by Francesco De Sanctis, as a series of stairs and terraces, never linked to any form of spatial symmetry and in a non-ending scenographic movement thanks to the use of straight paths, curves and polygonal.

The church of Trinità dei Monti has dominated the square since 1502. It was built near the monastery founded by St. Francis di Paola in 1493.  In 1502, Louis XII had the Trinità dei Monti church built next to this monastery, for the French Catholics residing in Rome.

The church was consecrated in 1585 by Pope Sistus V who considered it the cornerstone for his ambitious plans of urban development for the city. Its elevated position and the strong upward thrust of its twin bell-towers make it one of the most suggestive landmarks in Rome.

The church contains a great number of paintings as well as many private chapels acquired by patrician families like the Orsini, the Altoviti and others.

At the end of the XVI century after the Spanish Embassy had established itself in a magnificent palace on the square, a wealthy prelate had another grand residence built there, which he subsequently donated (in 1612) to the influential Jesuit Congregation of the Propaganda Fide. In that period, (between 1627 and 1629) an unusually shaped fountain was built at the foot of the steps.

It is known as the Barcaccia (the boat) and was the first of many fountains built in Rome by the architect Gian Lorenzo Bernini.

It was commissioned by Pope Urhan VIII (Barberini), and was shaped like a boat with two prows to commemorate the great flond of the Tiber in 1598 when it had been possible to reach this point by boat.

In this period, while the French and the Spaniards, as lords of Trinità dei Monti vied with each other for supremacy in the hope of gaining more territorial prestige, interest in this square, that had the fame of being a privileged enclave, began to attract numerous foreigners to Rome. Many taverns, inns, and cafes were opened, and between the seventeenth and nineteenth centuries, business and commercial activities began to concentrate there as well.

Towards the middle of the sixteenth century the French began to plan a flight of steps to connect the square to their church on the hill above, but it was only in 1723 that Pope Innocent XIII decided to name Francesco de Sanctis, whom the French approved of, as the executor of the famous steps.

This beautiful stairway gave the square its graceful and elegant seventeenth century touch that was the reason for its popularity during the Romantic and the Art Nouveau periods. These steps have a powerful scenic, almost theatrical effect on the square, which makes them an ideal stage for the annual fashion parade “Donna sotto le Stelle” when the most important Italian and international stylists present their collections.

The striking architecture of the area was designed by Pope Sixtus V, a renowned town planner of the time. Through the centuries, millions of visitors have walked the Spanish Steps and admired their timeless beauty.

Book a tour or send your request

B&B near the Coliseum