Information about feast of italian republic and the military parade:

The Italian Republic Day is celebrated on June 2 to commemorate the birth of the Republic.
On 2 and 3 June 1946 was held, in fact, the institutional referendum held by universal
[ads1]suffrage under which the Italians were called to the polls to express what form of government, monarchy or republic, give the country, following the fall of Fascism. After 85 years of reign, Italy became a republic and the monarchs of the House of Savoy were exiled.
On June 2, celebrates the birth of the nation, as July 14 French and American July 4th.
All over the world Italian embassies celebrate the occasion when you are invited Heads of State of the host country. From all over the world come to the President of the Italian Republic wishes of the other Heads of State and Special official ceremonies are held in Italy.
Before the feast of the Republic, the Italian national celebration was the first Sunday of June, the feast of the Albertine Statute.
Only in 2001 pushed the then President of the Republic, Carlo Azeglio Ciampi, the second Amato government, by law no. 336, November 20, 2000, brought the festivities to 2 June, then went back to being a public holiday.
In June of 1948 for the first time in Via dei Fori Imperiali in Rome hosted a military parade in honor of the Republic. In 1950, the parade was included for the first time in the protocol of official celebrations.
The ceremony involves the laying of a wreath to the Unknown Soldier at the Altar of the Fatherland and a military parade in front of the highest offices of state.
The celebration of the military parade and lay wreaths at the Unknown Soldier, taking part in all the Armed Forces, the Police of the Republic and the National Body of Fire Brigades and the Italian Red Cross. In 2005, took part in the parade also the Municipal Police of Rome on behalf of all local police of Italy and the staff of Civil Protection. They take part in the military parade some military delegations and representatives of departments that have a multinational Italian component, such as the ONU and NATO.
Since its establishment until its temporary abolition, could count on the military parade parade of more staff.
The ceremony continues in the afternoon with the opening to the public of the gardens of the Quirinale Palace, seat of the Presidency of the Italian Republic, with musical performances by the band of the Italian Army, Italian Navy, Italian Air Force, of ‘Carabinieri, State Police, the Guardia di Finanza, the Penitentiary Police Corps and the State Forestry Corps. 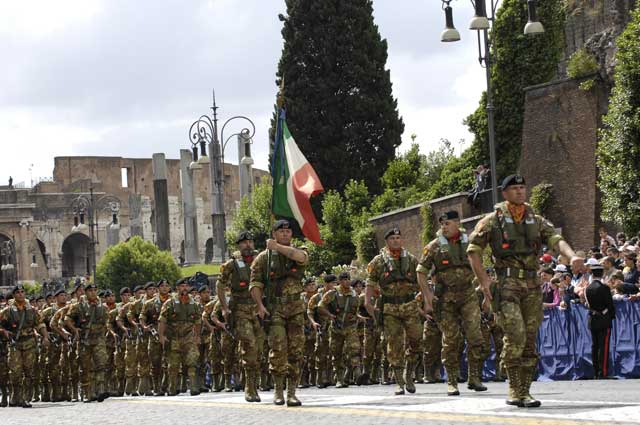