Campo di Fiori in Rome and its open Market Information

St.Peter Square in The Vatican City

Campo di Fiori in Rome and its open Market Information 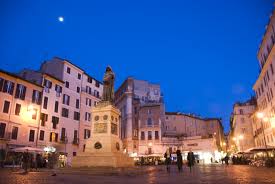 Six mornings a week, one of the world’s liveliest outdoor markets opens for

business in Campo de’ Fiori-a vast,moving still-life of tables piled high with bargain trinkets, kitchen equipment, and enough glistening produce, fresh cheese, meat, and fish to make an amateur chef long for a kitchen instead of a hotel room to return to.

Begin with a stop at S. Andrea della Valle, the baroque setting for the first act of Verdi’s Tosca.

By night, the square is an international youth fest, where caffes overflow with locals and tourists; traveling stu­dents who’ve run short on cash have been known to sing for their supper at the base of the statue of Giordano Brunoin the center of the piazza.

The statue honors the iconoclastic scholar whose conviction for heresy, unlike Galileo’s 30 years later, has never been retracted by the Church, and who was burned alive on this spot in 1603.

The surrounding streets, mostly named for the trades once practiced in them, are filled with stylish shops and restaurants. Stop into Fahrenheit 451  on the north side of the square to see its well-stocked shelves of books in English, and the bakery 11 Fornaio  at V. dei Baullari no. 7 for memorable bread and pastries.

If traveling with teenagers, leave by way of V. dei Giubbonari , which is lined with inexpensive fashions pretty much from end to end.

Today it’s filled with people and activity round the clock, but centuries agoCampo dei Fiori was just a flowery meadow (as suggested by its name, which literally means “field of flowers”) and an execution spot during the Inquisition.

r Giordano Brunowas burned at the stake for heresy in 1600, allegedly for daring to opine that the earth revolved around the sun. Hisstatue now stands at the centre of this square.During the day, Campo dei Fiorihosts an open-air food market from Monday to Saturday. Stalls set up around 07.00 and pack up around 13.30.

Here you can find seasonal fruits and vegetables, as well as fresh meat and fish. Lining the square are food shops,restaurants and plenty of outdoor cafes.

request information with the form below