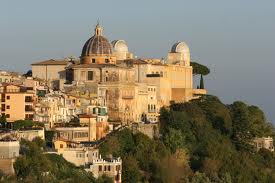 Following the long sequences of mighty archers running through Rome’s outskirts and countryside, we will visit the Aqueduct Archaeological Park to see the massive aqueducts which have powerfully withstood time and to hear detailed accounts of the hydraulic engineering abilities attained by the ancients to canalize huge amounts of water to Rome. In antiquity 11 aqueducts  furnished quality water to thousands of public baths, fountains, homes, imperial and patrician gardens and to the population’s needs.

Continue your way to Castelli Romani area celebrated for landscapes beloved by poets, painters and writers of the 19th century Romantic Era, to see the Pope’s Summer Palace perched on the slopes of an extinct volcano whose crater holds a superb lake. Visit charming Castelgandolfo where the Pope meets pilgrims in summer and then Nemi with its medieval castle overlooking a smaller enchanting lake where Emperors Caligula and Nero used to orchestrate refined sumptuous banquets and feasts on luxuriously rigged rafts to entertain  and surprise visiting foreign dignitaries. This famed area is considered one of the most beautiful spots in Italy and is the bronze-age cradle of the Latin peoples and language who later were to found Rome on the banks of the Tiber river.

Renaissance popes and cardinals dotted these lush landscapes with splendid country palaces and estates and after passing Grottaferrata and Marino where during the October Wine Festival all public fountains spout, instead of  water, jets of wine, we descend to picturesque Frascati, a delightful hill-town. Here, taste the famous local white wines produced  on the surrounding mineral-rich and fertile volcanic soils which give them  a particular component supposedly excellent for nerves.

Visit Cardinal Aldobrandini’s Villa, begun in 1598, a monumental country palace-estate with baroque sculptured gardens and art-work and after an opportunity of pleasantly mingling with the natives of Frascati to enjoy the warm and communicative Italian village way of life, maybe shop for a traditional “Pupazze” ,a woman-shaped symbol of fertility with three breasts. After which head back to Rome by rapid highway.

[box type=”info” ]
MEETING POINT:
At your hotel or other agreed spot in Rome.
MEETING TIME:
Any time chosen by you
GROUP SIZE:
That of your party
DURATION:
3 hours