Rome – Moses of Michelagelo in Rome

The residents of Trastevere speak of themselves as Noiantri “we ourselves”-a tradition celebrated every July with an all-night feast, but in fact it is among the most welcoming of Roman neighbourhoods, filled with cafés, restaurants, and shops.

its twisting backstreets rich with the scent of  home cooking. From Piazza Belli, take the second street to the right, V. Della Lungaretta, to the Piazza di S. Maria in Trastevere,

the liveliest part of the district and its undis­puted heart. 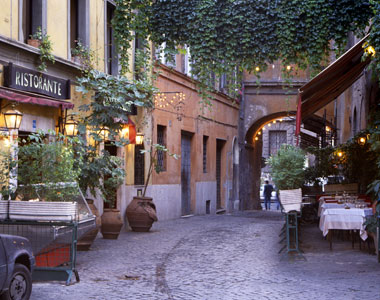 Local families chase their toddlers around the graceful fountain in the center of the square, while tourists gape at the incomparable 12th-c. Byzantine mosaic facade of the Church of St. Maria, depicting Mary with the suckling infant Jesus, flanked by 10 young women carrying oil lamps, The interior is equally dazzling.

Leave time after visiting the church to explore nearby streets, then follow v. dI S. Cosimiato (to the right of the fountain) out of the  piazza to V. di S. Francesco a Ripa.

Turn left; the street cuts diagonally across the district to Piazza di S. Francesco d Assisi and the church of St. Francesco a Ripa , where you  can visit S. Francis’s cell. Follow V. Anicia out of the piazza to V. Della Madonna dell’Orto, right to V. di S. Michele, and left to Piazza dei Mercanti and the Church of St. Cecilia .

From here, follow the map back to Piazza G. Belli by way of tiny Piazza Piscinula.

Trastevere is a picturesque medieval area located on the west bank of the Tiber. The area escaped the grand developments which changed the face of central Rome, and is a charming place to wander, eat or relax.

Tucked into the widest bend of the Tiber, and accessible from the Ghetto by Ponte Fabricio , Rome’s oldest sur­viving bridge, is the picturesque Isola Tiberina. Felicitously shaped like a boat, the tiny island inspired ancient Romans to embellish it as one, with a stone “prow” and “stern” and an obelisk in the center as a “mast.” Legend holds that during the plague of 291 B.C., a delegation was sent to Greece for a statue of Aesculapius, the god of healing, whose intervention it was hoped would end the siege. As the ship carrying the statue approached, a huge snake, Aesculapius’s symbol, was seen swimming from the ship to the island, a sign that a temple should be built there.

The original had wide porticos, beneath which the sick slept in hopes of a cure. In the 10th c. it was replaced by a church, long known as St. Bartholomew’s  for the relics of the saint it holds inside a beautiful red porphyry tub beneath the main altar.

A medieval hospice has since been supplanted by the hospital of the Fate bene fratelli (“brothers who do good works”), toward which a steady stream of visitors heads bearing flowers.

Before leaving, descend the stairs on the far side, where Ponte Cestio  links the island to Trastevere, and enjoy a quiet stroll around the island, stopping at the south end for a look at the Cloaca Maxima  where it feeds into the river. 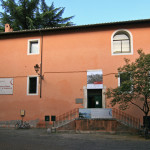 Rome – Museum – Museum in Rome – Trastevere Museum ROME MUSEUM OF ROME IN TRASTEVERE ROME  (MUSEO DI ROMA IN TRASTEVERE) The museum is housed in the building that was the seat of the Convent of the barefooted Carmelites from 1610 until after the Unity of Italy In 1875 it become the property of the City of Rome; in 1918 the a sanatorium for … Read More » 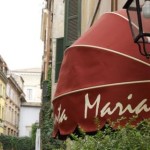 The Hotel Residenza Santa Maria in Rome,  is a lovely place to spend your Roman holiday in the heart of the district of  Trastevere. It is considered one of the best Hotels in Rome for its location, Rome city center, and comforts. The rooms feature wooden furniture and ceilings with exposed beams that give the place a cozy image, but … Read More » 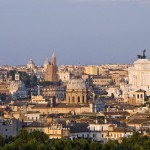 The Gianicolo does not count as one of the official seven hills of Rome, but many Romans would argue it is the prettiest, overlooking the City  from the west, dotted with vast parks and beautiful villas. It is accessible by foot from Trastevere, and is worth the climb on a beautiful day. Start up the winding V. Garibaldi, past the convent andChurch o£ S. Maria Sette Dolori , …Read More »