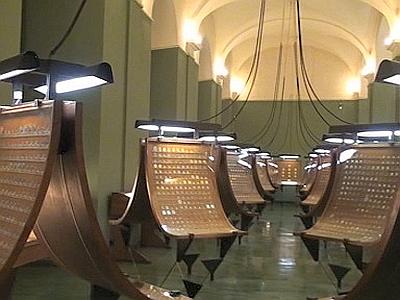 The section devoted to coins contains a rich collection of issues by Italian and foreign states from the Middle Ages to the current day, together with an interesting nucleus of coin-making studies (includingdesigns and pilot coins).

The collection of medals is divided into three main groups: papal medals (mainly recoinage from the first half of the 19th century by Francesco Mazio, director of the Papal Mint); religious or devotional medalsprivately executed between the 18th and the 19th centuries by Papal engravers for use by pilgrims; and 20th century medals by Italian and foreign artists, many of them donated, such as the valuable collection ofOrlando Paladino Orlandini (1905-1986).

The minting tools include several stamps and punches from the papal collection and parts used to mint the devotional medals.

The collection of wax patterns for medals and cameos, supporting material which may nonetheless be admired in its own right, contains an sizeable nucleus of works (425 wax forms) by Benedetto Pistrucci (1784-1855), the Roman engraver famous for his design of the gold sterling in London, and various items byGiuseppe Bianchi and his son Francesco, who were active in Rome in the mid 19th century.