the most important museum in rome

The project for the new complex of the Museo dell’Ara Pacis (Altar of Peace) is the work of the architect Richard Meier, author of some of the most important museums of the second half of the 20th century.

The new building occupies the fourth side of the Piazza Augusto Imperatore, which was left unfinished by Morpurgo in the 1930s, and is divided into three main sectors.
The first sector is an artificially lit gallery containing a visitors’ centre. Access is up a flight of stairs which takes us from the level of Via Ripetta to the level of the Lungotevere. We then enter the main exhibition area, where in daylight hours the altar is immersed in softly diffused light from skylights and through broad filtering crystal windows.

The construction of the altar took place in the northern part of the Field of Mars in an area where Octavian had already decided to build hisMausoleum and was now planning to build a large sundial at the same time as the Ara Pacis, which would have been named after him as theHorologium or Solarium Augusti. 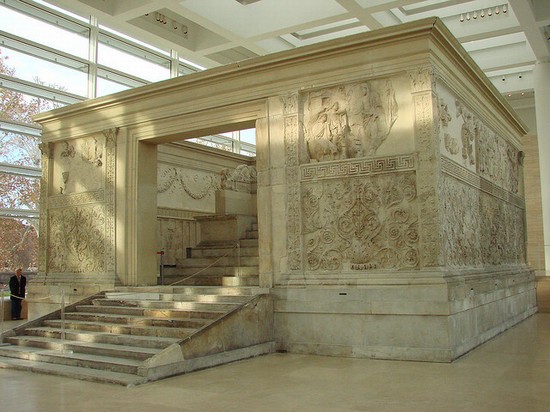 The recovery of the Ara Pacis was started in the 16th century and was concluded only four centuries later, after a series of chance discoveries and specific excavations, with the recomposition of the monument in 1938.

The first evidence ofthe re-emergence of the altar from the foundations of the Palazzo in Via in Lucina (owned by the Peretti family and then the Fiano family and Almagia families) is provided by a carving by Agostino Veneziano made prior to 1536 depicting a swan with outstretched wings and a large portion of the spiralled frieze.

Recovery work started in 1903 and was completed in 1937- Between June and September 1938 the work to build the pavilion to house the monument on the Lungotevere took place alongside the excavations.

The inauguration took place on 23 September 1938.

The Ara Pacis consists of an enclosure which stands on a large marble base and is divided into two decorative orders: the lower one containsplant patterns, while the upper one is figurative, with the representation of mythical scenes on either side of the enclosure’s two entrances and a procession of people on its other sides.

Members of the Augustan family start to file past immediately afterwards. On the south side , Augustus himself and Agrippa have been identified with some certainty, along with other figures, including the young Gaius Caesar, his son, and Livia, the prince’s bride.
On the north side are more members of the family, including Lucius Caesar, Octavia the Younger and Marcella.
The lower order of the enclosure is decorated with a plant friezeconsisting of spirals emanating from an acanthus figure and a centralcandelabra bearing plant motifs.

The monument is also illustrated with a series of aids designed to display its main characteristics: scale models, plaster casts and fragments from similar monuments (it)