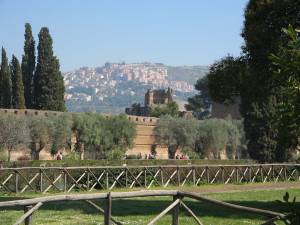 PRIVILEGED ENTRANCE. NO WAITING!
ROUTE ON FOOT, NO SHORTS NO SLEEVELESS PUTFITS
TOUR AVAILABLE ONLY IN LIMOUSINE OR MINIVAN
TOUR SUITABLE FOR CHILDREN

At Tivoli see by the huge quarries, where in antiquity, thousands of slaves and prisoners toiled in dangerous and brutal conditions to excavate large travertine lime-stone blocks used for constructing the Colosseum, the Theatre of Marcellus, numerous aqueducts and bridges, all still surviving in Rome today. Proceed to the close by Villa of Hadrian, erected between 118AD and 125AD, a fabulous imperial dwelling-complex, quite probably designed by this highly sophisticated, intelligent and art-loving sovereign, which sprawls over low valleys and slopes shaded by magnificent umbrella pines, olive tress and cypresses. The extraordinary variety of edifices, loose adaptations of prestigious monuments which inspired Hadrian during his extensive voyages throughout the vast territories of the Roman Empire were partially unearthed in the Renaissance. Its buildings influenced many great architects like L.B. Alberti, Bramante, Michelangelo, Raphael and later, in the baroque age, fascinated Bernini and Borromini. 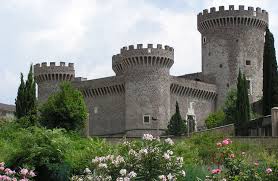 Some 500 beautiful ancient Greek and Roman statues were dug out in the grounds and are now in the Vatican and Capitoline Museums and other prestigious European Museums. Your expert but entertaining guide will unravel and show the grounds, bringing alive the imperial court’s daily life under Hadrian,  a capable emperor, who though often indulged in dissolute and licentious activities. See the Maritime Theatre, Greek and Latin Libraries where the emperor enjoyed intellectual discussions in the company of philosophers, poets and artists, the Throne Room, Imperial Palace Wings, Palaestra, Poikile, the Stadium, Greater and Smaller Roman Baths and the famous Canopo Water-Canal surrounded by arcades and ancient statues where high visiting political dignitaries were entertained and which was named after a branch of the Nile river in which Antinous, an  adored youthful companion, tragically drowned in mysterious circumstances.

Then visit Villa D’Este a dream-like fairytale renaissance palace with gorgeously sculptered gardens which belonged to Cardinal Ippolito II, son of Lucrezia Borgia menber of one of the most infamous families in the history of the papacy. Specifically created to console this cardinal after his unsuccessful attempt at being elected pope in the 1550 conclave.

You will witness the opulent way of living of one of the wealthiest men of his time and stroll through the gardens filled with fountains of cascading gurgling waters, with hundreds of hissing jets, a setting worthy of kings, popes and princes who were regular guests of the cardinal’s splendid court. One of the very first Italian renaissance styled gardens, it was laid out by a great antiquarian Pirro Ligorio who retraced descriptions and documentation on the “Ars Topiaria” (landscape gardening) developed by the ancient Romans in republican and imperial times. The ingenious hydraulic systems invented by Ligorio to funnel the huge volumes of water from Tivoli’s Aniene river to feed all  fountains and to produce the strong pressures needed for the jets of water are astonishing even today. Be enveloped by the fragrances, cool sprays and inebriating scents of the lush and relaxing vegetation and feel what it was like to live as renaissance prince and discover how Franz Litzt was bemused and stimulated into composing his “Fountains of Villa D’Este”. Search out the distant dome of St.Peter’s on the horizon before  returning  to Rome.

MEETING POINT:
At your hotel or other agreed spot in Rome.
MEETING TIME:
Every day except on
DURATION:
4 hours