This charming Rome apartment for rent is situated  in Via Portico d’ Ottavia, in the old Jewish Ghetto, a quiet island in the most central district of Rome. The apartment is on the  first floor  of  an historical 15th century patrician building “Palazzo dei Fabii”.  At the beginning of the 20th century it was converted into private apartments. “Palazzo dei Fabii” is one of the best preserved medieval buildings in Rome, its original architecture of the internal court yard makes it one of the main attractions of the “Jewish ghetto”.

The location of the apartment is  perfect  to explore the most important attractions of Rome without using transportations. It is situated  right next to the ancient  Marcello’s Theatre and within 5 minutes walk to the archeological area of  Largo Torre Argentina (Where Julius Caesar was assassinated), the Capitoline hill, the Roman Forum, the Pantheon, Piazza Farnese, Campo de Fiori, Navona Square, Trastevere district,  Villa Farnesina, Palazzo Corsini and other important tourist attractions . 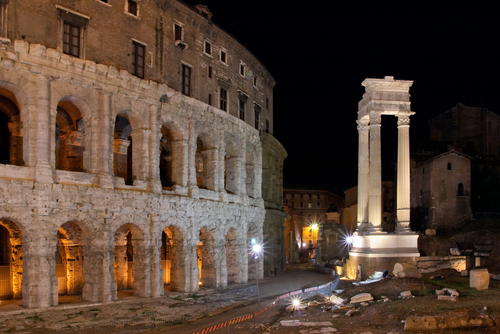 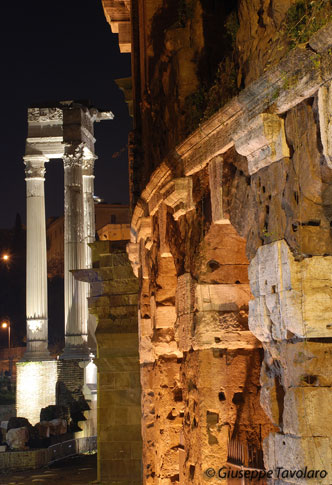 On the first floor of this patrician building we propose a fully furnished and very quiet apartment (studio). It is an open-space (75 sq. meters), it develops on two different levels and it is furnished with simple, but elegant oak wood furniture and wooden ceilings. Renovation of the antique brick archways, as well as the artistic hand painted frescos, give at the apartment an atmosphere of refined elegance. It features all modern amenities: air conditioning, safe, tv, telephone , WI.FI, etc. 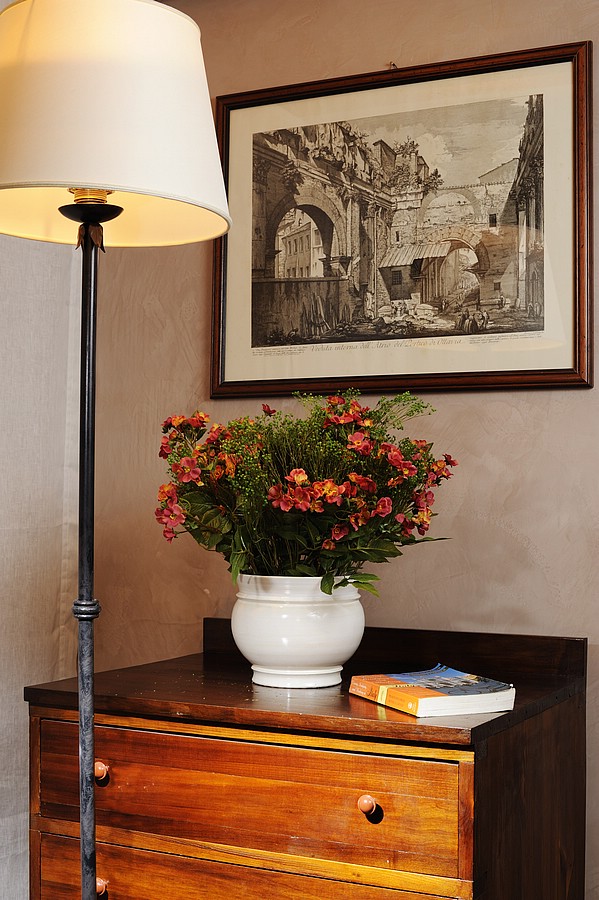 On the first level we find a comfortable and elegant living room, a well equipped kitchen and a large bathroom; on the second level the sleeping area.

The cozy living room with its “pastello” colors and its pleasant furniture is perfect to relax after a long day . Moreover there are TV, telephone, sofa bed an armchair and a nice wooden table very useful for breakfast time.

The kitchen is equipped with: gas stove, oven, fridge, freezer, toaster, pots, cutlery, plates, glasses, cups and all you need for cooking and eating. 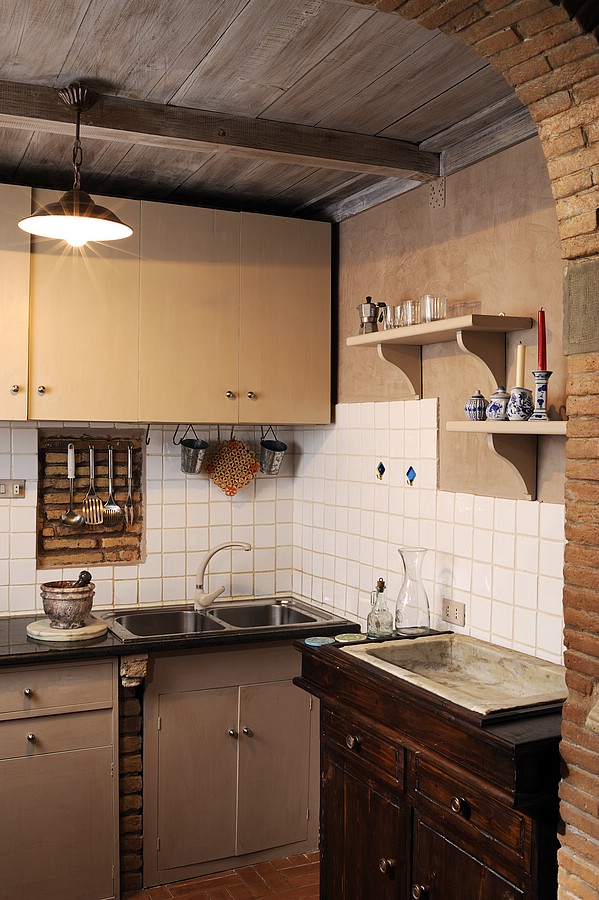 At the same level we find the large bathroom fully furnished bathroom with Jacuzzi and shower, hair-dryer ( soap, shampoo, towels…etc).

On the upper floor, reachable from staircase,  there is a bedroom, with a double bed and TV and also a small room with a single bed.

In the immediate neighborhood there are, many restaurants, pizzerias, pubs, shops, wineries,  two food supermarkets – Despar on Corso Vittorio Emmanuele and Punto right behind San Carlo, towards Sant’Andrea della Vale, on Via dei Monti della Farina. In the latter supermarket there is fresh fish stand towards the weekend, where you can buy the daily catch. Alternatively, you can shop for any food at Campo de Fiori, and there are numerous pizzerias around, selling every imaginable kind of pizza. 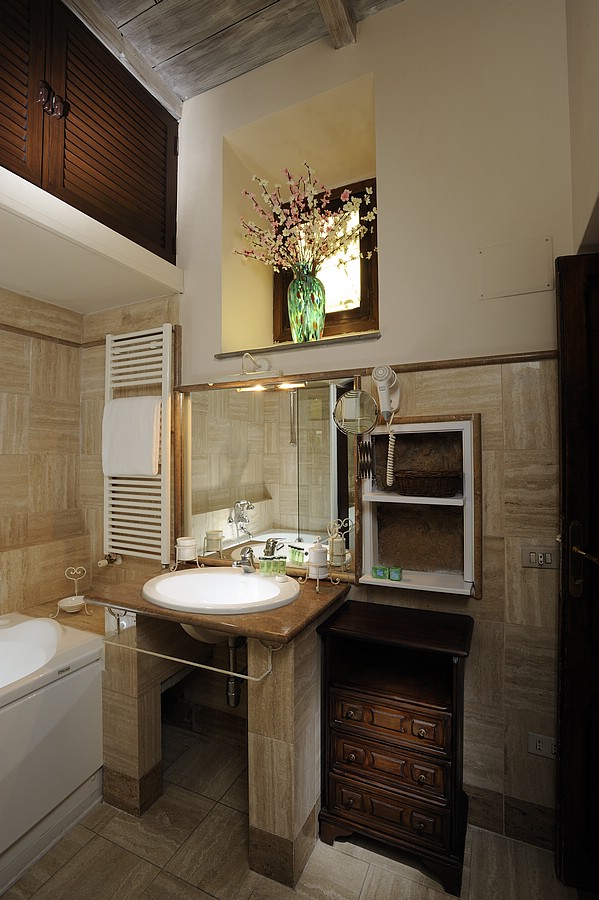 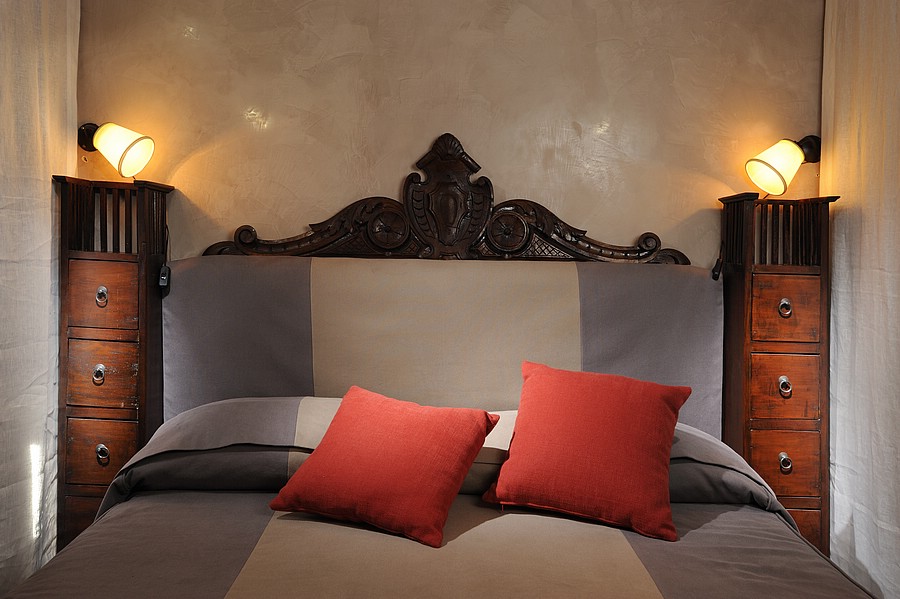 FOR MORE INFORMATION OR TO BOOK CLIK HERE

Information about the Jewish Ghetto in Rome:

the Jewish community of Rome, the second oldest in the world, it is from the 4th century BC that the Jews are living in the same area of the city. It was chosen by them because, for many centuries, (from the founding of Rome 753 BC to 19 sec) in this area were located the most important markets of the city of Rome and the presence of the nearby Tiber Island made ​​this place a strategic point for both matters military and commercial. In the 1555, when Pope Paul IV forced the Jews to reside within a walled ghetto, for 300 years, between the Counter-Reformation (16th century) and Italian unification (19th century). Though part of the old ghetto has been torn down, you can still find many traces of the Roman Jews’ culture. If you want to visit the synagogue and museum, avoid this walk on a Saturday, when they’re closed. If you are interested in a guided tour you can contact https://www.tourinrome.com

Itinerary suggested to visit the Jewish Ghetto in Rome.
Getting There: The Jewish ghetto was — and Rome’s main Synagogue still is — on the left bank of the river Tevere, in front of the Isola Tiberina ( Tiberina’ Island) and the archaeological area of the Theater of Marcellus (Teatro di Marcello). 5 minutes walk from Piazza Venezia.
If you’re not in the Synagogue for a prayer service the only way to gain access to the interior is with an official guided tour, which has to be booked in advance at least one day before. The Synagogue cannot be visited on Saturday. Rome Jewish Ghetto official Walking Tours are organized by the tour company www.tourinrome.com. 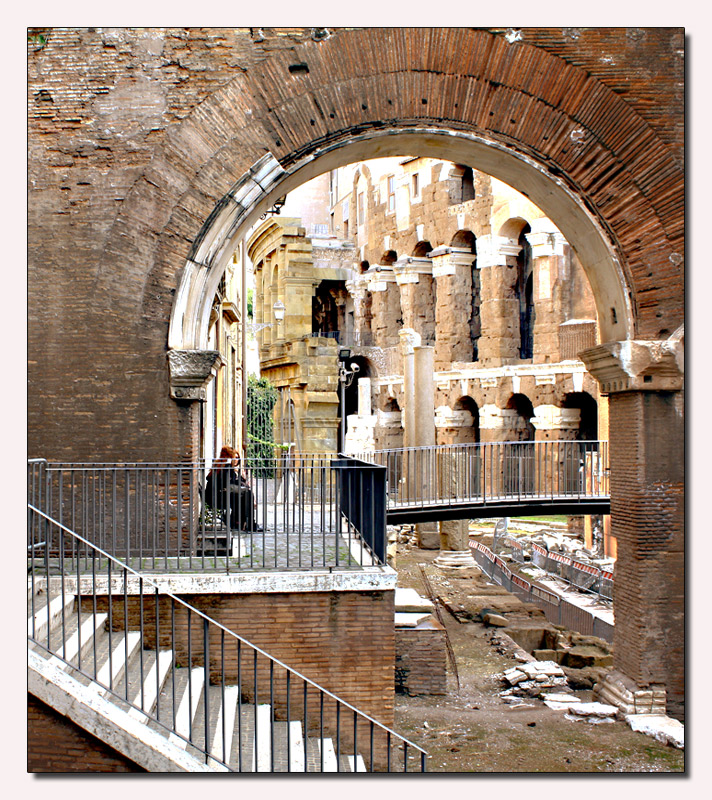 Starting from Ponte Fabricio (Fabricio’s Bridge was also known as  Pons Judaeocum “Jews’ Bridge”), which connects the banks of the river Tiber to the Tiberina island From the neighborhood of Trastevere, crossing the bridge and the island you’ll see soon the synagogue.  The ancient ghetto consists of the synagogue and few blocks behind it.
This new “Synagogue of Emancipation “in art Nouveau, (in the 1986, Pope John Paul II made his historic visit), was built in only three years (inaugurated in the 1904).
The remarkable square dome, (square to be distinguished it from the Christian churches) inside is beautifully painted like the all interiors.The museum shows off historically significant artifacts described in English.
Behind the synagogue near the ancient Roman ruins there is small square called Largo “16 October 1943”, the day when Nazi trucks parked here and threatened to take the Jews to concentration camps unless the community came up with 110 pounds of gold in 24 hours. Everyone, including non-Jewish Romans, tossed in their precious gold, and the demand was met. The Nazis took the gold, and later, they took the Jews as well.
Portico d’Ottavia
This market was built by the emperor Augustus and dedicated to Octavia his sister.  After Rome’s fall, the portico housed a fish market then in the 8th century, the Portico was incorporated into the Church of Sant’Angelo in Pescheria.
From the nearby bridge, you can get a nice view of Teatro di Marcello.
Via del Portico d’Ottavia is the main drag and best preserved of the old streets here you can get the taste of yesterday’s and today’s ghetto. In the street, notice kosher restaurants proudly serving typical roman food like carciofi (artichokes), shops of locally produced Judaic art, galleries,
At the end of the street there is a square where elders, bringing their favorite chairs from home, spend the afternoon enjoying the breeze. In this square you will find a traditional Jewish bakery and a 15th century building decorated with a big stone insert with a Latin inscription and an original ancient roman marble depicting a lion attacking a gazelle. Even if most of the Jewish community is dispersed all over Rome, this neighborhood continue to be the most point of reference for all Roman Jews. From Via della Reginella. you can reach the square Piazza Mattei where there is a little but beautiful fountain a Mannerist work, later embellished with turtles by Bernini.

FOR MORE INFORMATION OR TO BOOK CLIK HERE

Family friendly Suitable for children of all ages

Notes: May take pets please enquire
No smoking at this property

Unsuitable for people with restricted mobility

Other: Linen, towels and cleaning provided

We can arrange the pick up at Euro 55 up to 4 people and € 75,00, up to 8 people
Airport – Rome by train to Termini Station
Public transportations: Service of public train to Termini Station in Rome. Price € 10. A train every 30 minutes.
From Termini Station to PORTICO D’OTTAVIA APARTMENT
ON FOOT: it’d be better to take a bus as it’s a 40 minutes walking.
BY BUS: going out of the station please take the bus 64, 40 or 70 and get off in LARGO ARGENTINA. From here via del PORTICO D’OTTAVIA is at 200 mts.
BY CAR: take the T90 – GRANDE RACCORDO ANULARE ROMA – “Roma Nord”, then please exit at SS4 Via Salaria, drive the Via Salaria following direction Porta Pia. Once at Porta Pia enter into the walls and drive via Nomentana till Piazza della Repubblica, then take the main Via Nazionale and drive it till Piazza Venezia, drive up to Via del Teatro di Marcello and one you have passed the ancient remains of the theatre on your once you are at the traffic light turn right direction lungotevere. Once you are on the lungotevere after 20mtres you will have on the right the Jewish Synagogue turn soon after to the right.100mtres you will be in Via del Portico D’Ottavia. Welcome.
From Fiumicino airport:
Take the train to Stazione Trastevere, then take the tram (line 8, direction Argentina). Get off at Arenula/Ministero Giustizia stop. As alternative, you can take a taxi from Stazione Trastevere, they usually charge roughly Euro 15. 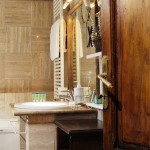 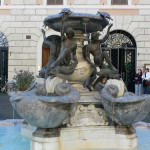 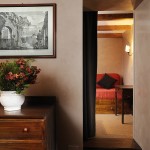 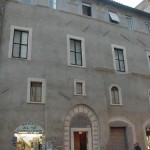 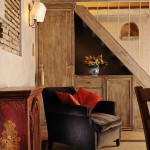 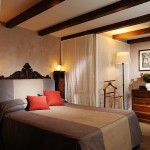 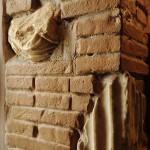 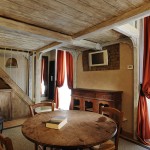 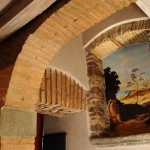 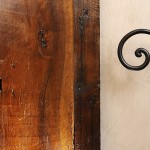 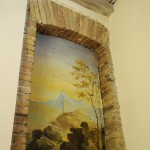 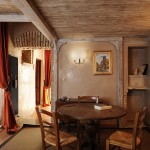 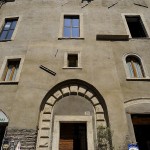 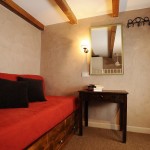 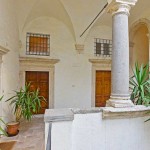 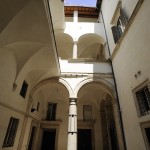 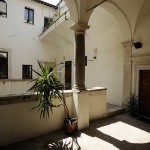 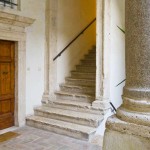