LIST AND INFORMATION ABOUT THE MOST IMPORTANT RELIGIOUS SITES OF ROME 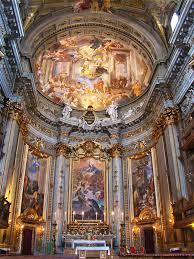 Since the 3rd century, the Jews have tenuously hung on to second place; followed now perhaps by the Anglicans.

The most recent newcomers are the Muslims, who have a wacky new mosque by Villa Ada designed by post-modern architect, Paolo Portoghesi.

Although the four Patriarchal basilicas (St Peter’s, San Paul’s outside the walls, St Maria Maggiore, St. john Lateran) are open every day, every other church closes in the afternoon (usually 12-4 or 5 pm).

As a rule, don’t enter if a service is in progress at the high altar; otherwise be discreet and walk around the chapel in use.

If the sacristan opens a chapel or crypt for you, give him a small tip .coin-operated light machines illuminate the  most important works; often a pair of opera glasses or binoculars comes in handy to see a lofty mosaic or fresco.

When Pope Benedict XVI is in Rome, general papal audience are held on Wednesdays at 11 am in the auditorium or in St Peter’s Square; in July and August the audiences are usually held in Castel Gandolfo.

To attend the papal Audience get in contact with www.vaticanguidedtour.com

If you need further information do not hesitate to contact our staff at info@romeinformation.info