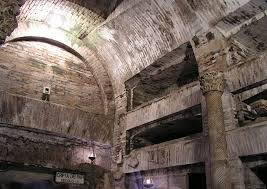 THE CATACOMBS OF ROME

For information about tours, guided tours, sightseeing and excursions:

Christians dug an estimated 375 miles of tomb-lined tunnels, with networks of galleries as many as five layers deep.

The volcanic tufa stone that Rome sits atop  soft and easy to cut, but which hardens when exposed to air  was perfect for the job.

The Christians burrowed many layers deep for two reasons: to get more mileage out of the donated land, and to be near martyrs and saints already buried there.

Most of the Catacombs are concentrated on the Appian Way.

The Apian Antica these days, is best known for its catacombs and tombs.

According to the Roma law, inherited from Etruscans, all burials had to be outside the pomerium, the sacred ground of the city itself, and like all consular roads the Via Appia was soon crowded with cemeteries and elaborate mausoleums of the wealthy.

Later the early Christian community built some of its most extensive catacombs here-the word itself is believed to come from the catacombs of  San Sebastiano, located near a dip (ad catacombs) in the road.

The Christians called them simply cemeteries.

Popular romance and modern cinema not with standing, they were never places of refuge from persecution or anything else; as cruel as the ancient Romans could be, they regarded bodies, even of executed criminals, as inviolate and their tombs as sacred.

Later Romans, as youve probably noticed by now, lacked any qualms their ancestors may have had and so, you may well ask, why is the Via Appia Antica so well preserved when the rest of extramural Rome has been mercilessly buried under tons of concrete? The Catacombs, a main destination in the Dark ages, were first pillaged by the Goths and the Lombards, and then by relic hunters; after the Saracen raid of 847, the whole Via Appia declined, and became infested throats malaria.

The Catacombs were abandoned and forgotten.

The great archaeologist Giambattista De Rossi rediscovered the lost Catacombs of St. Calixtus in 1850, while the sculptor Antonio Canova deserves the credit for the innovative idea of leaving the tombs, or at least casts, along the road where they were found instead of carting them off to rot in a museum.