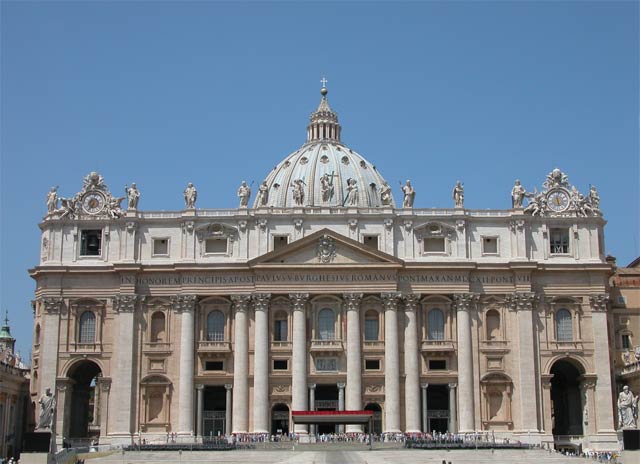 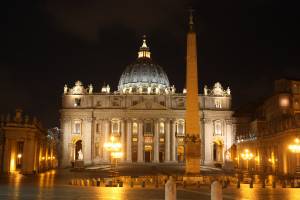 Looming over all is the massive façade of the Basilica of St. Peter and a lofty campanile topped by the famous golden cockerel that everyone believed would some day crow to announce the end of the world.

This St Peter’s, where Charlemagne and Frederick II received theirimperial crowns, was falling to pieces by the 1400s, conveniently in time for the popes and artists of the Renaissance to plan a replacement.

The first to do so was Nicholas V, who, in about 1450, conceived an almost Neronian building programme for the Vatican, ten times as large as anything his ancestors could have contemplated -a complex that would have stretched all the way to Castel Sant’Angelo.

It was not until Julius II realized that there was not enough room in the basilica for his planned tomb that he commissioned Bramante to demolishthe old church and begin the new.

His original plan called for a great dome over a central Greek cross.Michelangelo, who took over the work in 1546, basically agreed, and if he had had his way St Peter’s might indeed have become the crowning achievement of Renaissance art everyone hoped it would be.

The most substantial tinkering came in 1605, when Paul V and his committed cardinals decided on a Latin cross after all.

Carlo Maderno was given the task of demolishing the portico of the oldbasilica to extend the nave, which had the unforeseen effect of blocking out the view of the dome, and he designed the facade (1612) with Paul V’sname blazoned on top.

But Maderno shouldn’t be blamed for its disproportionate width: Bernini, who was in charge of decorating the interior, had the bright idea of adding twin campaniles to the flanks which were such a dismal failure that they were levelled to the same height as Maderno’s facade.

In the centre is the balcony from which the pope gives his Urbl et Orbi blessing at Easter and Christmas.

On 18 Nov 1626, the supposed 1300th anniversary of the original basilica,Urban VIII consecrated the new St Peter’s.

Step inside, hopefully past the security men and the dress code bouncers without trouble, and into the Portico.

Some of the best art in St Peter’s is in the Portico, beginning with the oldest and hardest to see, Giotto’s 1298 mosaic of Christ walking on water, called the Navi cella, located in the tympanum over the central door; this has been so often loved and restored almost nothing remains of the original. At the extreme right end of the portico is Bernini’s equestrianstatue of Constantine, showing the Emperor staring at the vision of the cross.

There are five sets of bronze doors into the basilica, the work of some of Italy’s leading modern sculptors.

the Holy Door, opened only in Holy Years (1950, by Vico Consorti); the next, by Venanzio Crocetti (1968); the famous central doors, from Old St Peter’s, made by Antonio Filarete (1439-45), with scenes from the lire ofPope Eugenius IV, who held an ecumenical council in Florence in 1441, an attempt to reconcile the differences between the Eastern and Western Churches III face of the mutual Turkish threat; you can recognizeEmperor John Palaeologos by his pointy hat, while Ethiopian monkspay homage to Eugenius.

on the other side of the right door, at the bottom, Filarete and his workmen may be seen dancing with their tools below an inscription in pidgin Latium.

The next set of doors to the left are by Giacomo Manzu (1963), with harrowing scenes of death and martyrdoms and victims torn like paper bags.

The last set of doors, by Luciano Minguzzi (1977), includes a charming hedgehog.

The plodding equestrian statue at the left end is of Charle­magne, by Cornacchini, giving the portico two knights in case any of the giant marble saints ever want to play chess.

The floor of the portico is by the indefatigable Bernini, embedded with the giant coat of arms of John XXIII by Manzu to commemorate the Second Vatican Council of 1962.

The Pieta of Michelangelo in Saint Peter’s Basilica

The best work Of art is right in front, in the first chapel an the right:Michelangelo’s famous Pieta, now restored and hard to see behind the glass that protects it from future madmen.

Finished in 1499, when he was only 25, the statue helped make Michelangelo’s reputation.

Its smooth and elegant figures, with the realities of death and grief sublimated an same ethereal plane known only to saints and artists, marked a turning paint in religious art-from here, the beautiful, unreal art ofthe religious Baroque was the logical next step. The Pieta is the only work Michelangelo ever signed ; he added it after overhearing a group Of tourists from Milan who thought the Pieta was the work ,Of a fellow Milanese.

Michelangelo sculpted the Pieta far the French ambassador; significantly, none , Of the art made to order far St Peter’s can match it.

By the time the basilica was finished, the great artists of the Renaissancewere dead, and whatever glories they may have contributed have been replaced by assembly-line Baroque statues and huge Caunter-Refarmatian paintings, in turn replaced by ‘mare eternal mosaic copies.

In 1939, when Pius XII ordered the Sanpietrini to lower the floor of the Sacred Grottoes and prepare a tomb for Pius Xl, the workmen discovered not only the floor of the Constantinian Basilica, but below this, signs of anancient tomb.

Although its existence has been documented since Bramante’s day, Pius XII was the first pope to consent to an exploration of the area (previous popes had superstitiously feared to disturb the bones, or worse yet, to learn that the Saracens in 846 had stolen St Peter’s relics after all).

All during the war, the secret excavations continued, uncovering one of the most remarkable sights in all Rome: the Ancient Necropolis of St Peter’s, a pristine street of pagan and early Christian tombs built around that of the Apostle.