The Piazza Venezia, for all practical purposes an open-air bus station these days, takes its name from the sober and beautiful Venice Palace  that occupies its entire north­west corner. 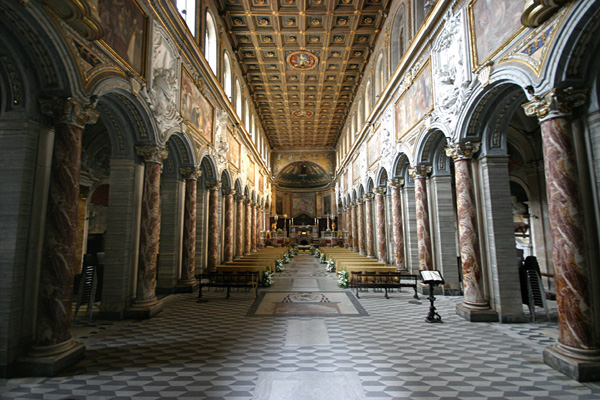 The highlight of the carnival was a horse race from Piazza del Popolo to the tomb of C. Publicius Bibulus. Known then as the Via Lata, it would come to be called the Corso-meaning course.

The palazzo’s beautiful gardens, with their graceful double loggia, once extended to the far side of the piazza but were removed to make way for the Vittorio Emanuele. Happily, the Basilica S. Marco, enclosed within the main wing of the Palazzo Venezia and entered through a double portico of stone taken from the Teatro Marcello and Coliseum, was left untouched. The Venezia’s Museum , one block up the Corso at V. del Plebiscito no. 118, contains a rich collection of 13th- to 18th-c. art. As you approach, note the small building at the corner, Palazzo Bonaparte, where Napoleon’s mother lived from 1815 to 1836 and made frequent appearances on the little balcony.

Built in the 7th c. on the site of the Roman Citadel-from which the honking of geese alerted Romans to the attack of the Gauls in 390 B.c.-the Aracoeli (altar of heaven) is a perfect example of the literal and symbolic layers of which Rome is built:

The Citadel was replaced by a temple to Juno, the mother-goddess, and the temple was in turn replaced by the palace where legend holds that Octavian had his vision of the heavens parting to reveal the Virgin Mary upon an altar-harbinger of the Christian era to come.

Its original spare brick facade masks an ornate interior, with columns salvaged from Augustus’s Palatine residence. Just inside the front door is the worn tombstone of Giovanni Crivelli by Donatello, now set into a column. Return to the sidewalk, and mount the hill once more via Michelangelo’s Cordonata , past the massive twins Castor and Pollux to Piazza del Campidoglio , the seat of Roman government since 1534.

The gilded bronze equestrian statue of Marc us Aurelius  in front of the Palazzo Senatorio, Rome’s City Hall, is a copy of the original, which was moved here from the Lateran Palace by Michelangelo.

The original can be seen behind glass in the Palazzo Nuovo , which with Palazzo dei Conservatori across the piazza forms the Capitoline Museum, an incomparable treasure of Roman art.